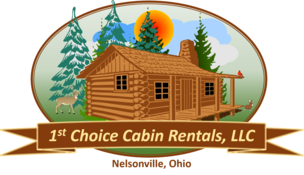 Old Man's Cave
If you’re looking for an adventure to take your breath away, Old Man’s Cave is your destination.  It is one of the most popular places to visit in the Hocking Hills Area. It is located on State Route 664. The Grandma Gatewood Trails begins, it approximately a 6 Mile trail system divided between three of the park's areas: Old Man's Cave to Cedar Falls to Ash Cave.

“Old Man's Cave derives its name from the hermit Richard Rowe who lived in the large recess cave of the gorge. His family moved to the Ohio River Valley around 1796 from the Cumberland Mountains of Tennessee to establish a trading post. He and his two dogs traveled through Ohio along the Scioto River in search of game. On one side trip up Salt Creek, he found the Hocking Region. Rowe lived out his life in the area and is buried beneath the ledge of the main recess cave. Earlier residents of the cave were two brothers, Nathaniel and Pat Rayon, who came to the area in 1795. They built a permanent cabin 30 feet north of the cave entrance. Both brothers are buried in or near the cave. Their cabin was later dismantled and relocated on the nearby Iles farm to be used as a tobacco drying house.”  The Old Man's Cave area can be divided into several different locations along the valley of Old Man's Creek.  When walking the trail system you will see in order, Upper Falls, Upper Gorge, Middle Falls, Lower Falls and Lower Gorge. Each one of the locations will take your breath away.

Cedar Falls
Is located a few miles from Old Man's Cave. It is a beautiful, private valley shielded by rock walls and featuring a spectacular waterfall.  If one were to venture down the Lower Gorge of Old Man's Cave, you would eventually enter the picturesque valley of Queer Creek. At the point where Old Man's Creek merges with Queer Creek, the trail takes an abrupt turn east and enters this new valley. The trail leading to Cedar Falls passes through the most austere area in Hocking Hills. This remote, primitive chasm is laden with hemlock and bound by steep rock walls and their accompanying grottos and waterfalls. It is a wild and lonely but spectacularly beautiful place.

Ash Cave
In the southernmost reaches of Hocking Hills is Ash Cave - beyond doubt the most spectacular feature of the entire park. Ash Cave is the largest, most impressive recess cave in the state. The approach to Ash Cave is through a narrow gorge lined with stately hemlocks, massive beech trees and various other hardwoods. The valley floor offers brilliant displays of wildflowers in the all seasons including large flowered trillium, Dutchman's breeches, trout lily, Jack-in-the Pulpit and jewelweed. The narrow gorge is approximately one-fourth mile in length and with astonishing suddenness gives way to the tremendous overhanging ledge and cave shelter. The horseshoe-shaped cave is massive; measuring 700 feet from end to end, 100 feet deep from the rear cave wall to its front edge with the rim rising 90 feet high. A small tributary of the East Fork of Queer Creek cascades over the rim into a small plunge pool below. The cave was formed like the others in this region; the middle layer of the Blackhand has been weathered or eroded while the more resistant upper and lower zones have remained intact.

Ash Cave is named after the huge pile of ashes found under the shelter by early settlers. The largest pile was recorded as being 100 feet long, 30 feet wide and 3 feet deep. The source of the ashes is unknown but is believed to be from Indian campfires built up over hundreds of years. One other belief is that the Indians were smelting silver or lead from the rocks. Still another theory claims that saltpeter was made in the cave. No matter the source, several thousand bushels of ashes were found. A test excavation of the ashes in 1877 revealed sticks, arrows, stalks of coarse grasses, animal bones in great variety, bits of pottery, flints and corn cobs.

Rock House
Is the only real cave in the Hocking Hills. It is a 200-foot long tunnel with a 25-foot-high ceiling located about halfway up a tall sandstone cliff. Because of its location and the presence of "hominy holes" (small recesses in the rock used for cooking by Native Americans), it has been a popular spot with visitors for many years now. This House of Rock has a ceiling 25 feet high while the main corridor is 200 feet long and 20 to 30 feet wide. The cavern was eroded out of the middle zone of the Blackhand sandstone. The resistant upper zone forms the roof and the lower zone forms the floor. Water leaking through a horizontal joint running parallel to the cliff face caused the hollowing of the corridor. This main joint or crack is very visible in the ceiling of the Rock House. A small series of joints run north to south at right angles to the main joint. Enlargement of this series of joints formed the window-like openings of Rock House.

Nature has hewn out of this cliff the Rock House complete with seven Gothic-arched windows and great sandstone columns which bear its massive roof. As one might imagine, Rock house was used for shelter by past visitors. Hominy holes, small recesses in the rear wall of Rock House, served as baking ovens for Native Americans using the cave. By building a fire in the small recesses, the rock became heated on all sides, and food could be bakes in this crude manner. Further evidence of past use is the presence of chiseled out troughs or holding tanks found in the stone floor. When rainfall is abundant, springs of water permeate through the porous sandstone and flow into these troughs fashioned by man and, when full, continue across the floor and out of the windows. In this way, residents were able to maintain a small water supply in Rock House. According to local folklore, other not so welcome visitors frequented Rock House. Robbers, horse thieves, murderers and even bootleggers earned Rock House its reputation as Robbers Roost.

Rock Bridge
The natural arch or bridge known as Rockbridge is more than 100 feet long and 10 to 20 feet wide, and gracefully arches 50 feet across a ravine. It is considered the largest natural bridge in the state. Only the Ladd Natural Bridge in Washington County rivals it in size. Ohio is a land of diverse geological features. Among the most unusual and spectacular formations are its natural rock bridges. Ohio has at least 12 such bridges.

Rockbridge Natural Bridge originated millions of years ago, when Ohio lay under a warm inland sea. Rivers flowed into the vast body of water, carrying both fine and coarse grained sands which settled to the sea bottom. Over the centuries, the accumulating sand thickened, compressed and formed the hard sedimentary rock known as Black Hand Sandstone. Eventually, great pressure from beneath the earth's surface caused the land in eastern North America to rise, forming the Appalachian Mountains. The inland sea soon drained away, exposing the newly uncovered rock layers to steady erosional processes. The natural bridge soon began emerging in all its grandeur. Wind, rain and percolating groundwater worked together for centuries, carving a deep cave-like recess in the softer midportion of the Mississippian Black Hand Sandstone. Gradually, erosional forces also worked along a natural joint plane some distance behind the brink of the cliff. Over the centuries, this ongoing process has widened the crevice, and all that remains of the overhanging ledge is the narrow rock arch.

Conkle's Hollow
Conkle's Hollow, situated off S.R. 374 on Big Pine Road is a rugged, rocky gorge - considered one of the deepest in Ohio. The valley floor is a veritable wilderness covered by a profusion of ferns and wildflowers while hemlock, birch and other hardwood tower overhead. The growth is so thick in places that little or no sunlight reaches the deep valley floor. For the more adventurous hiker, the rim trail on top of the cliffs circles the gorge. These cliffs are the highest in the area and provide some of the most outstanding scenery. Great caution should be exercised on this trail as it can be extremely dangerous in all seasons.

This hollow was named for W.J. Conkle who left his name and the date 1797 carved into the sandstone on the west wall of the gorge. Conkles Hollow is a state nature preserve operated by ODNR Division of Natural Areas and Preserves

Cantwell Cliffs is located in the northern reaches of Hocking Hills - 17 miles from Old Man's Cave on S.R. 374. Its remote location discourages visitation, but those who travel the extra distance will not be disappointed. Many visitors proclaim the Cantwell area as the most picturesque in Hocking County.

Thank you for contacting us! We will add you to our next Newsletter mailing!
Trail Map's